A little background….I went vegetarian at the age of 15 – a young, passionate teenager vehemently sharing my views on animal rights and the plight of the voiceless from the day I read Peter Singer’s eye opening book “Animal Liberation”. Since then, I can’t honestly say I was 100% every single day – there were times, like during my two pregnancies, that I did revert back to my meat-eating ways.  Back then there was no facebook, no instagram, no YouTube, not much in the way of social media with which to share the horrific images and stories of what goes on behind those slaughterhouse walls.  I never did any research either, as to whether or not a vegetarian diet could sustain a healthy pregnancy.  I just thought I had no choice, that I had to eat animal flesh to get the protein I needed.  Boy was I wrong!

During the last omnivore stint, every time I would consume animal flesh I would get sick.  Terrible stomach aches and indigestion accompanied by intense gas pains (gross I know) and misery after eating.  Every…single…time.  That was it.  My body was telling me to stop and I had no problem quitting again cold turkey.  I never looked back.

Here it is 15 years later and I have a daughter who reminds me a lot of someone I used to know.  About 2 years ago, after eating a steak dinner, for some reason she decided to watch a video on YouTube “If the Slaughterhouse Had Glass Walls”.  On the way to drop her off at her friend’s house that night she said to me “I’m not eating meat anymore.  I watched this video and cried the entire time”.  I felt my heart leap in my chest and knew one day she would figure it out for herself. This was the day!

About a year into it, she told me she wanted to go Vegan.  My daughter does a lot of her own research and was horrified to learn of the methods used in the dairy and egg industry.  Although I was still eating these things, I supported her in her decision and did not try to sway her either way.  Veganism just seemed so difficult to me.  The thought of coffee without creamer in it, no cheese pizza and no tuna sandwiches or egg biscuits…how could I give that up?  I was buying “Organic” creamer and cheese, “cage free certified humane” eggs and “sustainable” fish.  Sounds okay right?  Cows have to be milked and hens have to lay eggs…that was my reasoning.  No, it’s not – it’s not okay and again, I was wrong.

Even though my 15 year old daughter had made a smooth transition and preached to me daily, it wasn’t until my visit to a local animal sanctuary opened my eyes to the necessity of living a totally Vegan lifestyle if I was truly wanting to do my part to end animal suffering.

Random post:  I’m finally caught up waking with work today and I’m sitting here reading my favorite blogs and munching on the most yummy snack ever.  Spicy roasted chickpeas (garbanzo beans).  I just discovered making them this way a few days ago.  My first attempt went bad — they burnt,  but the ones I have today…aaaaah, party in my mouth.  I thought I’d share the goodness.

So here’s how you make them:

Take a can of chickpeas and rinse them really good. Get all that starchy water off of them.  Then dump them out on some paper towels and dry them off completely. Throw them in a bowl and mix with about 2 tbsp olive oil and spices to your liking.  I used garlic powder,onion powder, red pepper flakes, salt and paprika. Stir them so that all the beans are coated well. Put them in a shallow pan (just a regular aluminum pan worked the best for me) and roast for 35 minutes on 375 degrees, shaking the pan every 10 minutes or so.  After 35 minutes is up, I added just a few squirts of soy sauce and shook them again — baked for another 10 minutes.

You can eat them right away or like me, put them in a bag and take them to work.  Or wherever.  I thought next time I would try using buffalo wing sauce…I love spicy stuff.  Good luck with them, lemme know how you like it!

These are not *exactly* the same chickpeas I’m eating at this very moment, but they will look like this when done. I found this pic on About.com

Warning:  It really is true what they say about beans, beans the musical fruit….eating these could be hazardous to the health of those around you.  Seriously.

The thought of cooking and baking without eggs or egg products really was mind boggling to me so I decided I would try to turn a few favorites into egg-less vegan versions.  One of my first attempts were these blueberry pancakes.  You can use frozen blueberries but fresh just makes them taste so much better! 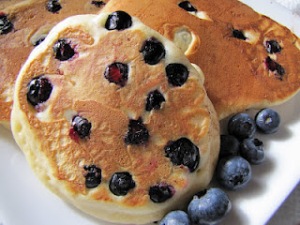 Pour almond milk in a small bowl and mix in vinegar.  Set aside.

Add in almond milk mixture and mix until blended.  If the mixture seems too pasty or thick you can add in a bit more milk until you reach your desired consistency.

Drop 1/4 cup at a time onto a greased, heated griddle, turn over once during cooking.

Vegan Recipes from across the Planet for a Kind and Compassionate World. Because the Future is Vegan.

A Journey to Myself through Crafts and Cooking

Traveller. Teacher. Vegan. A blog about figuring things out as you go along.